I LOVE the holiday season! There’s something so magical about decorations and lights everywhere! One of my favourite parts of the holiday season are the limited-edition holiday themed drinks. As mentioned in my Starbucks Christmas Blend post, I wait ALLLLLL year for peppermint mochas to be available!

This perfectly reflects my annual excitement for peppermint mochas.

So, I set out to find the best peppermint mocha from the places that are typically most convenient for me to go to for coffee: Starbucks, Second Cup and McDonalds. 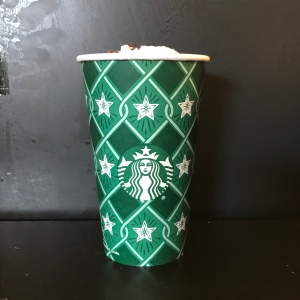 Going into this, I thought that the Starbucks peppermint mocha would undoubtedly be my favourite. When I ordered my first peppermint mocha of the season, I was not disappointed. The whipped cream on the top is a nice touch, bonus points for any drink with whipped cream! Throughout the drink, you get tastes of peppermint, with some chocolate and a hint of coffee. The taste is consistent as you keep sipping, meaning that it doesn’t lose or gain flavour by the time you get to the bottom. The coffee taste is not strong, but the peppermint taste is. The peppermint is almost overpowering throughout the drink, which doesn’t bother me, but if you don’t like peppermint, then this may be too much for you.

At Second Cup, they sell a peppermint moccacino. It’s described as “bold Espresso Forte combined with a blend of creamy chocolate and white chocolate and peppermint syrup,” which sounds pretty much like a mocha. Unfortunately, no whipped cream😢 But there were candy cane pieces on top, which are kinda fun and very festive.  At least, there were on the one that I purchased, but I’m not sure if they all have them. At first, the peppermint taste was very strong. There was really no chocolatey taste in this one. There was certainly a strong coffee taste though. It almost tasted like a latte, in that I could taste both the coffee and some steamed milk. Even though both the coffee and the peppermint tastes were strong initially, the flavours throughout were very inconsistent. Some sips had the perfect amount of flavours, whereas others were really lacking. By the end of the drink, it really just tasted like warm milk.

Now, the peppermint mocha at McDonald’s surprised me. Don’t get me wrong, I quite like McDonald’s coffee and have had their speciality coffee drinks before and always been pleased. But their peppermint mocha surprised me, in the best way possible. First of all, there was whipped topping AND peppermint sprinkles!! The peppermint sprinkles had a bit of a crunch to them, which was actually quite nice. The peppermint flavour was not quite as strong as the Starbucks one, but the flavour was still evident. This one definitely tasted more like coffee, similar to the Second Cup moccacino. Unlike that drink, this mocha successfully maintained a great taste throughout. I liked the McDonald’s mocha far more than I thought I was going to. Even though the McCafé menu has been around for a while, I guess I still associate McDonald’s with French fries and McNuggets. But I would order this drink again and plan on trying more of their speciality coffees!

With McDonald’s coming in a VERY close second!

Honestly, they’re both delicious. I think the main difference is the coffee and chocolate taste in the Starbucks one, opposed to the prominent coffee taste in the McDonalds one. Keep in mind what you want from your peppermint mocha and chose accordingly! I’m a fan of both, so it’s really dependent on which flavour I’m in the mood for that day and which has a shorter drive through line!